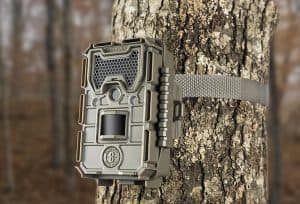 There are a lot of reasons why we would want to hide our trail camera from other people. First off, unwanted trespassers might be tempted to either take this valuable item for themselves or destroy it for personal reasons. As it is in most cases, there are individuals who would grab on to such equipment and then take it for themselves or sell it.

While such behavior is not characteristic to a lot of people, there are still ones that would have no problem breaking moral code and committing similar crimes. In order to protect ourselves properly, we must make sure to learn how to hide trail camera from humans and consequently prevent such undesirable cases.

So, what can we do in order to effectively execute this process?

How To Hide Your Trail Camera From Other People?

Learning how to hide trail camera from humans begins with adjusting the height at which we place it. One of the most effective such practices is to simply put it in a spot where other people could not reach it and consequently prevent any unwanted cases of theft. It is preferable that the distance between the camera and the ground is at least 10 feet, By placing your equipment so high, you essentially lower the chances of somebody seeing it and wanting to take it down, as not many people have the preparation necessary to climb to such height.

2. It’s All in the Camouflage

Another great method for how to hide wildlife camera from humans is by camouflaging it, so it is way more difficult to spot and less likely to be seen by potential ill-intentioned people and thieves. While most trail camera cases are highly ineffective in making it indistinguishable from the environment as they come in either brown or green color, it is important to remember that in nature there are no such one-dye things. It is important that when we are choosing the trail camera we want to use, it has a slight surface camouflage so that it is not easily spotted in the dynamic scenery of nature.

An interesting method for how to hide trail camera from humans which is not widely discussed is by foiling its surface and thus making it harder to be seen as foiling obscures angular lines. An alternative to that is to make a special box in which to put the trail camera and get basically the same effect.

The last suggestion for how to hide trail camera from humans that we are going to make in this article is simply to avoid areas with high trafficking where large groups of people occasionally go through. Make the extra effort to walk several meters into a hard-to-get-to zone of the location and put the trail camera there. This will surely make it less likely to be found by trespassers. Find a place of wide vegetation where there aren’t obvious signs of human presence and put it there – you will see the effects right away!

Doing one of the things we have discussed in this article is sure to bring you success in hiding your trail camera from other people. When it comes to such valuable equipment, no excuses should be made about the safety of the item and we must take all possible precautionary measures in order to ensure its safety and functionality!

Top 7 Best Fujifilm Instant Camera To Get In 2022