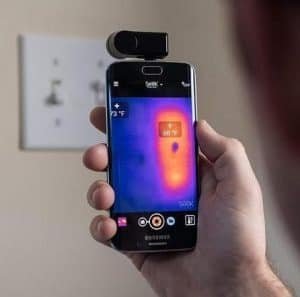 Today we are going to review some of the best thermal cameras that you can use for hunting. Well, Observing animals in the dark can be challenging. Nocturnal animals are sensitive to noise and even the slightest light that they can see from cameras.

One of the best things that you can invest in as a hunter, conservationist, or simply an outdoor enthusiast is a thermal camera. A thermographic camera works well, especially in pitch dark situations.

What makes it better than your typical IR hunting cameras?

The growing popularity of thermal imaging for hunting isn’t surprising given that the camera can track body heat instead of using IR flash to illuminate the animals in the wild.

Since animals can’t hide their heat signature, it is easier for hunters to spot the animals they are looking for. And also, it can even aid conservationists when it comes to observing a particular area.

It minimizes the chances that animals hide behind the bushes and they can’t be seen even by IR cameras. To give you an idea about the best products in the market today, here are some of the best thermal cameras including FLIR thermal cameras that you might want to check. 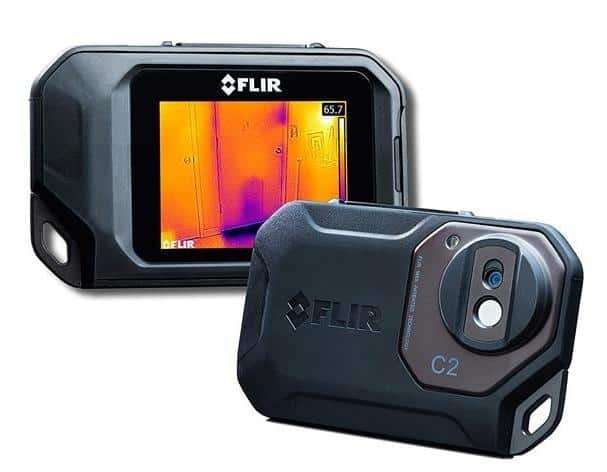 FLIR C2 Compact Thermal Camera is our top pick as the best thermal imaging camera. This thermal camera is discreet and compact in design. It can be set up in the dark and not get noticed by animals passing by. Since it is pocket-sized, you can easily set it up in the wild. However, you have to consider the design of this thermal camera.

First, you might want to consider using it during the dry season. If not, you want to have it protected and not get wet when you have it in the wild. By design, it is used mainly to spot plumbing clogs and other industrial applications and not necessarily for the wild.

The camera has a 45° field of view. What it does is offer a wide-angle for the users. The camera also features high-sensitivity when it comes to disturbances in thermal patterns which is why it has been used by a lot of professionals in the construction.

This best thermal camera for hunting can store around 4,800 individual thermal measurements making it easier to analyze your data. And also, you can edit everything using the FLIR Tool software.

This top FLIR Thermal Camera has a 3” touch screen wherein you can preview the images that it captures. Also, it makes use of MSX Image Enhancement that is known to produce better clarity on your shots.

It makes use of an internal battery that can last roughly around two hours at most when fully charged. And also, it can store around 500 sets of photographs once the camera is fully charged. However, it depends from one situation to the next.

Often, consumers argue which is the best thermal camera between Seek vs FLIR.

If you are looking for a small device that you can keep along with your phone or tablet, then you have Seek as the runaway winner. It is a stand out simply because it isn’t exactly a separate camera but simply a contraption that you can have in your device.

The Seek Thermal Compact is designed mainly for Android tablets and smartphones. This android thermal camera can be attached on your device and you don’t need to have a bulky thermal camera anymore.

To use this thermal imaging camera, you will also have to download the app. The camera has a 36° field of view which is quite mediocre. However, it has a focusable lens and can have a detection range of -40°C to 330°C.

Also, it is worth mentioning that this best thermal camera has 206 x 156 thermal sensor. When used in the wild, the camera picks up the heat register even if it is around 50 to 60 yards away.

This best thermal camera for Android can capture both videos and photos giving users the flexibility that they need. And also, there are 9 color palettes. With its specs, it has become popular among hunters that don’t want to carry a bulky device.

One of the best things about the Seek Thermal Compact camera is that it doesn’t require any battery whatsoever. Instead, it gets its power directly from the tablet or the smartphone that you are using.

Seek Thermal Compact also has an iOS version. This iPhone thermal camera is compatible with a tablet or your iPhone. It looks similar to its Android version.

It is also small plus you can just get it whenever you need it. You can have it handy especially if you don’t have plans of carrying so many things when observing wildlife.

Once that you have it attached on your iPhone, you can the way you usually do it. Given its handy nature, a lot of contractors made use of this camera.

What makes it a suitable thermal camera for hunters is its waterproof casing. It means that it can tolerate a bit of rain.

This camera has 206 x 156 thermal sensor can give a heat register that matches your needs. But just like the Android version, it has a narrow field of vision at 36°

This thermal imaging hunting camera can take both photos and videos. And also, it has a spot temperature feature that allows you to target a particular area. And it has 9 color palettes.

The thermal camera is then powered by the iOS smartphone or the tablet that you are using. It only means that you want to have a camera that has good battery life.

Unfortunately, if used in the wild, it isn’t the best option considering that you will always have to hold the camera. There is no contraption that you can set it up on a tripod or something stable.

Unfortunately, one complaint regarding the camera is its slow frame-rate.

There are plenty of interesting features on this camera. For instance, it has a 2.4-inch screen. And also, you have a full angle HD feature. You can also make use of a micro SD card if you think that the 4GB internal memory isn’t enough.

The thermal camera makes use of 4 x AA batteries. One problem that people complain about is that the PerfectPrime Thermal Camera tends to burn the batteries fast. It is also a good thermal imaging camera for home inspection.

The FLIR TG165 Spot Thermal Camera was designed with comfort in mind. It allows the user to point at a subject and read its heat registry.

It is handy given its handle plus you can easily get to see the details on its screen. Unfortunately, if you are going to use it in the wild, it might be a good idea to always have it ready on your side.

The camera can track down in total darkness. This thermal imaging hunting camera even works at around 70 yards and effectively locates animals. It has also been used by a lot of contractors given its ability to find shorted transistors and capacitors.

When it comes to the object temperature range, this thermal camera can track from -25° to 380°C which can be considered a wide range. This camera has 150mk sensitivity plus a resolution of 80×60.

Unfortunately, this camera doesn’t take videos which could’ve been useful especially if you are going to use it in the wild.

This FLIR Thermal Camera features a fast download for the images that it saved via a USB. Also, it has the microthermal sensor which gives you the ability to see the heat, giving users the accuracy that they need.

The battery is a rechargeable lithium-ion battery.

How Do Thermal Imaging Cameras Work? 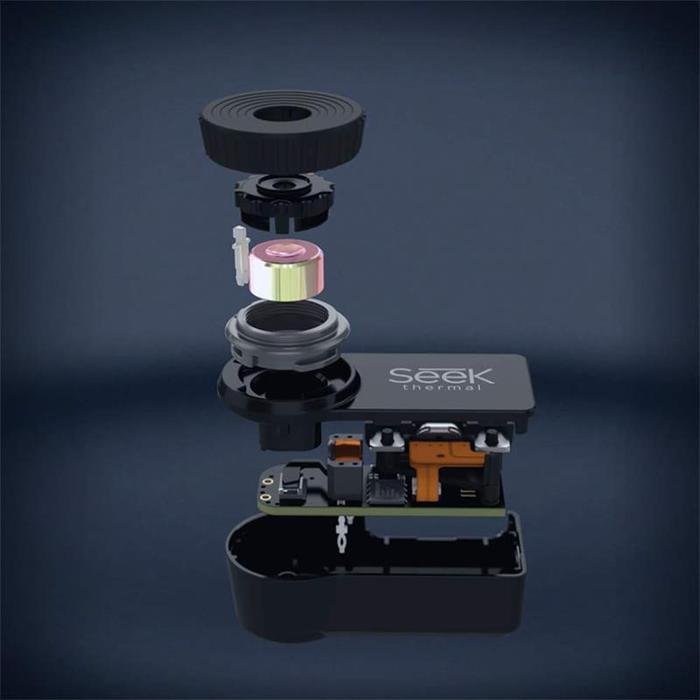 Heat detection cameras work with the help of a bolometer.

A bolometer is an instrument invented in 1878, used mainly to detect heat. Through the years, thermal hunting cameras made use of this instrument to get the heat register of both living and non-living things that it captures.

Now, let’s dig deeper into the microbolometer. This is a specific type of bolometer that has been utilized by modern heat detection cameras.

What are the advantages of a microbolometer?

First, it allows the modern heat vision camera to become lightweight. A microbolometer is small and could fit in small dimensions.

Also, it is fast since it can provide an image after you turn the power on. And lastly, a microbolometer is the reason why people can enjoy the cheapest thermal camera options in the market.

There are a variety of top brands that have used microbolometers including FLIR, BAE Systems, NEC and L3 Technologies to name a few.

There are a few things that you will have to consider if you are going to invest in a thermal camera.

Aside from the design, durability, and the overall construction of the camera, you also need to make sure that you know more about the passive infrared sensor used by the camera.

How good is its body heat detector feature?

A passive infrared sensor measures the infrared light within its field of view that radiating from an object.

Also, you will have to know more about the difference between near-infrared and long-wave infrared.

Near-infrared, as the name suggests is found infrared within the wavelengths 800 to 2500nm. On the other hand, the long-wave infrared is collected within the 8 to 15 µm wavelength.

It matters to check the sensitivity of the thermal camera you are going to use. Some are sensitive in detecting 0.10°C changes while on the other hand, there are those cameras that can detect 0.5°C.

Next, you will have to consider how you are going to use a thermal camera. Is it meant for industrial use or for observing wildlife?

If it is going to be used to observe the wild, might as well consider its construction gave the rough outdoors that could get the camera wet and even exposed to high temperatures.

This is all about thermal imaging hunting cameras.

The FLIR C2 is the best pick in our list for a couple of reasons. For instance, it has a wide field of view plus it makes use of the MSX Image Enhancement technology that FLIR is known for.

Next, FLIR TG165 Spot Thermal Camera makes as our most durable pick. It offers a solid construction plus an ergonomic design to top it all off.

And lastly, Seek Thermal Compact wins the best iOS camera. Simply have attached on your iPhone or tablet and you are ready to go.

7 Best Trail Cameras Under 150: Which is the Best Bang for your Buck?