There are many individuals today who are using trail cameras in order to capture animals such as deer in their natural habitat. In fact, these game cameras are definitely here to stay considering the growing trend of more sophisticated cameras that work on different conditions. Sturdy, easy to use, and cameras that produce high-quality image and videos, these are just some of the things that you can expect from game cameras.

Game cameras play a huge role for hunters and even for conservationist trying to have an idea about the population of animals in a particular area. Having your very own trail camera is considered a valuable asset. But you have to understand exactly how each camera works. You have to understand how to set it up correctly in order to get the best images and videos whether it is day or night.

Not knowing how to use trail cams can simply prevent you from getting the images and videos that you expect from the camera. In reality, it is a skill that you can hone over time. It may also take some trial and error in order to get the best photos and videos.

Check Out How To Setup and Use Trail Cameras

Our purpose for this article is to help you minimize your mistakes from using to setting up the camera in the wild. You will also understand the differences between different brands in terms of set up and usage. 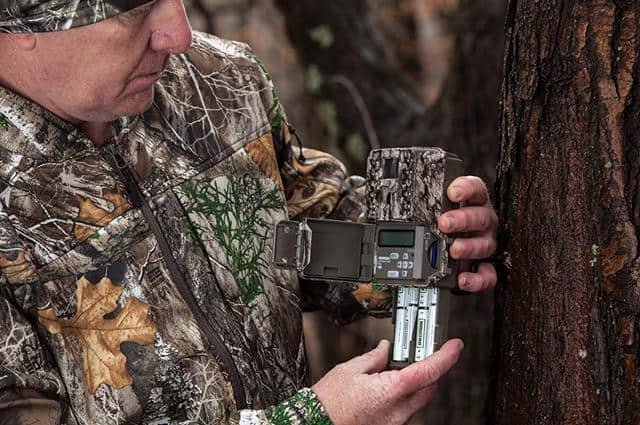 Setting up of trail cameras

One of the most important things that you need to know in how to use trail cams is its set up. So how exactly do you set up a game camera? There are slight differences from one brand to the next. Be sure to read the manual in order to see the particular details.

However, a common step that every user needs to do is to make sure that they take everything out of the box the moment that it has arrived on their doorstep.

The next step is to make sure that you know exactly how to use the camera. How many batteries do you need? What about the detection range of the camera?

These are the details that you will have to understand before even bringing the camera to the wild. You also need to make sure that you know exactly how to turn the camera on and choose between the different configurations.

Be sure to know exactly the different modes and how it comes in handy in different scenarios. This way, you will be able to switch smoothly from video to taking photos in rapid succession and ultimately, be able to maximize the use of your game camera.

Next, you will need to set the SD card and the battery. This is the perfect time for you to ensure that the camera is working properly. Make sure that the trigger speed, timer, flash, and other aspects of the camera are working.

On the other hand, if you are going to use it as home security, you want to make sure that it is placed in an ideal location that can observe people heading to your property.

If you are going to observe wildlife such as a deer, it is best if you take into consideration mineral sites and feeders whenever you are setting the camera in order to maximize the results. And of course, you want to have the perfect height for observing wildlife. Depending on who you will ask, there are those who prefer the cameras to be found in the bushes on a tripod while there are those who prefer to tie the camera on a tree around knee high from the ground.

There are different ways how you can set up the camera to a tree. Some make use of a bungee cord while there are those who make use of straps that go with the camera. Other than this, you can also get a separate mount that can make things so much easier especially when dealing with an unpredictable weather that might knock off your camera when it has been installed.

Also, be sure that you knock down vegetation that could potentially be blocking the view on your camera. You don’t want photos of a branch that is being blown by the wind.

You will also need to make sure that you consider the direction of the sunset and sunrise. You don’t want to get overexposed shots. You want the camera to be a bit to the side of sunrise in order to get the right exposure even during the morning.

Game cameras are highly versatile devices. In fact, different brands will most likely give you different features and surprises. These weatherproof cameras have become a handy tool not only for hunters and conservationists but also for people who are trying to monitor their home.

A lot of photographers have made use of game cameras in order to monitor animals. This way, they know exactly where to go and around what time to take the photo. At the same time, there are those photographers that are using the game cameras to get high-quality photos and videos.

On the other hand, hunters use these cameras whenever they decide to take a closer look at the behavior of the animals such as deer. This way, they don’t waste so much time exploring different places only to end up with nothing.

And lastly, you have families that use the cameras for security purpose or even as a nanny cam. This gives them the opportunity to review what happened both inside and outside the house. And since some game cameras can now transmit videos via WiFi or via text, it becomes convenient to see the photos even without taking out the memory card.

But of course, the usage of the camera depends on its specs. There are cameras, for instance, that have no capacity to send images via email and text. On the other hand, there are cameras that have no-glow features that can minimize the chances of alarming animals at night. Usually, most game cameras, especially lower end ones, still have LEDs that still lights up which could potentially alarm animals being observed.

The recovery time and different modes will also play a huge role how the camera is being used. You want the camera to be ready to take a video or photo with minimal lag time especially when the trail camera has been used for home security.

Detection range also matters how it is going to be used in the wild. There are those cameras that have a decent angle that the camera can capture. And of course, you also have to take into consideration the quality of the photo and video. For game cameras that have been designed to be left for a couple of weeks into the wild, a lot of its designers opted to not have HD functions. This way, it is possible to save a lot of photos and videos on a 32 gig memory card.

A lot of people make the mistake of checking the memory card every now and then. In fact, this can be considered counterproductive. As rule of thumb, you want to check the memory card after a week or two. When using a 32 gig card, it would be sufficient enough to take photos and videos in the wild for the next week or two.

What you want is to make sure that there is no unneeded interference whenever you are using the camera.

But of course, you have to make sure that you know the camera’s detection range. From the angle to the distance that the camera is allowed to detect, these are some things you should first know in order to get the best results.

In addition to this, you have to always ensure that the camera is going to be using only a blank memory card. There is a possibility that the unit is not going to accept the card if it is partially used or it is already full.

Be sure to also check if it hasn’t been knocked around by animals or even by the elements.

There are instances wherein you will have to reset the camera and make sure that it points to the direction that you prefer.

You also want to make sure that you have multiple game cameras on hand if you are going to observe different trails. This makes sure that you get as many images and videos that you need whenever you are working outdoors. You can also easily determine which areas are high traffic routes for deer.

Maintenance work can be done from the outside to the inside. First, you want to check for any sign of exterior damage on the game camera. There is a chance that the camera’s electronic parts might malfunction if its exterior has lost its weatherproof capacity. A lot of animals will lick and observe the camera, thus, consider the reality that it might get knocked around especially when you failed to install the camera properly in the woods.

You also want to make sure that you clean the lens. Usually, dirt and moisture might make the lens foggy stopping you from taking superb photos and videos.

You don’t want to just use any type of material when cleaning the lens because some fabrics may end up scratching your camera’s lens instead. You want to use microfiber cloths and proper lens cleaning liquid to get rid of the dirt and animal saliva.

The buckles and the straps should also be observed and replaced if needed. This will ensure that the trail camera is going to be used in the outdoors without any problem.

You also want to check for any sign that insects or any pest may have made its way inside your camera. There are instances wherein these small insects can do a significantly higher damage than animals. It is highly suggested that you spray a bit of insecticide on your unit’s housing before using it in the wild.

Next, you also want to take the battery out if the camera isn’t being used. Just like any other electronic item, this can corrode the contacts. If you are already dealing with corrosion, use a small amount of white vinegar and wipe it using a cotton on the camera’s contact.

Once you have done all of the things that we have mentioned, make sure to take a few photos and videos to see if the trail camera is working properly.