In this post, we are going to review one of the cheapest trail cameras released by Tasco i.e. Tasco 6 MP trail camera.

Are you tired of spending a ton of money on trail cameras? ­ I stumbled across Tasco’s 6 MP trail camera and was surprised scouting cameras could be sold at such an affordable price.

The low price of Tasco’s scouting camera sets the 6 MP camera apart from other cameras. The low price is comparable to the cost of other 3 MP cameras.

This product comes with:

What’s in the box?

The camera comes packaged with a nylon strap for tieing the camera to a tree or object. The strap is pretty basic, and not a high-quality product.

There are no SD cards, batteries or other accessories included with Tasco’s 6 MP scouting camera.

Occasionally, competitor products will have an SD card included with the purchase of a camera.

Like most trail cameras, the camera is primarily composed of plastic materials. The infrared flash bulbs are located in the center of the camera. The light sensor is located amidst the infrared lights.

One downside of the camera is the durability. The camera does not seem to be constructed with the durability you expect from higher-end cameras. However, this is a cheap trail camera, and for the price, the durability is adequate.

A few customers have reported difficulties ejecting the battery pack due to the eject button breaking on Tasco 119271cw cameras.

I would not recommend throwing the camera in front of your ATV and driving around though. Tasco does back its Tasco game cameras with a one year warranty.

Although the camera is not waterproof, it is fairly water resistant. You can confidently leave the camera outside throughout the year without fear of rain damaging your camera.

There is a rubber seal used to prevent water from coming in and damaging the camera.

Although this is one of the lowest costing trail cameras on the market, no one wants to buy a new camera because of theft or tampering. You may need to invest in a compatible lockbox to protect your camera.

CAMLOCKBOX is compatible with this Tasco low-cost trial camera. The lock box is created to discourage tampering by humans as well as animals.

With the purchase of a lock box, you can expand the usefulness of the camera. Some people use budget cameras for added security around houses and dwellings.

The Tasco game camera is designed to accommodate users for quick and easy checking of the camera. To get to the SD card, unbuckle the two latches on the right side of the camera and open the door of the camera.

The SD card slot is located on the right side of the camera, machining it easy to switch cards in the field.

If you do decide to take the camera back to see the photos on your computer or T.V., there is a cable port where the USB cable can be plugged directly into the camera.

Note: the USB cable is NOT included with the camera.

During night, the camera’s infrared flash is used to display images. Older cameras used a traditional flash, which alerted and scared off animals.

Infrared technology, used in Tasco’s 6 MP trail camera, emits light with IR technology. Allegedly, deer perceive the flash as a shade of gray. So while it is likely deer do not see the red color emitted, they may see a gray colored light emitted.

Deer often will look at the camera, as will coyotes. I do not recommend placing cameras with IR technology close to your intended hunting location. Rather, use the camera to capture images of wildlife headed towards or away from your hunting spot. 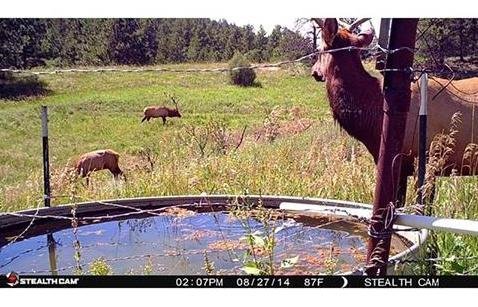 Video – video segments up to 30 seconds can be captured with 720-pixel resolution.

Images – 6 MP photos are captured and recorded to SD card

Image bursts can be captured in groups up to 3 images per burst.

Because the trail camera is a 6 MP scouting camera, the quality of the photos and videos are lower when compared to higher quality cameras.

For clearer night videos, you may want to look into purchasing a 10 MP camera. Be warned, you need to pay more for a camera with more megapixels.

For instance, the images will be fuzzy and details are hard to view. You will have difficulty counting tines on bucks if they are not close to the camera.

Night time photos and videos can be fuzzy as well. When an animal is close to the camera, the animal is often bright white.

You may also set a time delay of:

Tasco’s 6 MP camera has a slow trigger speed, 1 second for photos and close to 3 seconds for videos. Slow trigger speeds because cameras to record a lot of blank footage, as the animal has already passed by the camera before it starts to record.

Luckily, the camera does recover fairly quickly and is ready for the next photo or video in as few as 5 seconds.

At night, the IR flash reaches as far as 40 feet. However, at 40 feet, the animal is hard to view. The PIR sensor is automatically synced to be sensitive to movement within a 47-degree field of view.

Videos are recorded 30 seconds long and a time lapse may be set to:

All photos and video come with a time and date stamp.

Tasco indicates the 8 AA batteries should run the camera for approximately 6 months. After some testing, I could I had to change the batteries more frequently.

Weather, temperature, and the number of pictures/videos being captured will all affect the battery life of the camera

Depending on the activity, you should be able to fill a 32 GB SD card a few times before changing batteries.

In conclusion, the Tasco MP 6 infrared trail camera is one of the lowest priced game cameras on the market. The camera lacks some features you will find in higher priced cameras. However, for the price, the camera is well made and should last you many hunting seasons.